Image quality in fluorescence microscopy is hindered by noise coming from the detector but mainly from the nature of light.

In widefield microscopy the detector is typically a CCD, sCMOS or EMCCD camera. The most important noise factor for imaging in these cameras is so called read-out noise. Noise (counts per pixel) for a CCD: ~7, sCMOS ~1, EMCCD <1 for low light (i.e. less than 10 photons/pixel). The sCMOS (scientific CMOS) camera’s would be the best choice for most fluorescent wide field microscopes. Only in very low emission light situations an EMCCD is the best choice.

In confocal microscopy the detector is typically a PMT (Photomultiplier Tube), APD (Avalanche Photodiode) or a combination HyD (Hybrid Detector). While a PMT is mostly used as an analog device, the APD and HyD are used as photon counters. As a result a PMT gives a little noise (due to the amplification) and APD and HyD only suffer from so called dark noise and thermal noise. Noise (counts per pixel) for a PMT: <1 for a APD/HyD <0.01.

Using sCMOS for wide field microscopy and APD/HyD for confocal microscopy is the best choice. A PMT for confocal has very low noise and a very large dynamic range making it better for samples with a high difference in fluorescence (e.g. large tissue, screening).

Overall the detectors used in modern, especially confocal, fluorescent microscopy have very low noise compared to the noise of coming from the nature of light.

Noise due to the nature of light

Light can be described as wave with a certain wavelength (color) and as a particle (photon). The modern concept of the photon was developed gradually by Albert Einstein. In fluorescent microscopy these photons arrive randomly in time at the detector. This results in so called Poisson noise (Simeon Poisson) also known as Shot noise (from Walter Schottky). In the figure below you see the distribution of 1, 4 and 10 expected photons captured by the detector within a certain exposure time. The Signal to Noise Ratio (SNR) in this case is the square root of the number of expected photons. 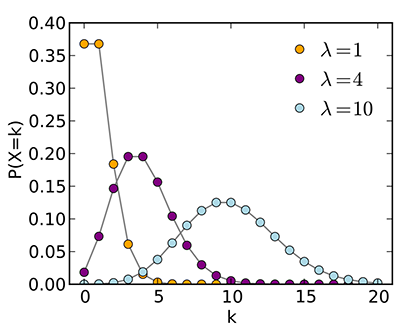 The effect of on image quality in fluorescence microscopy due to photon noise is clearly visible in the animated picture below. Capturing up to 100 photons/pixel in a confocal is already challenging (see tutorial “Which Microscope to use“). 400 photons/pixel is easy achievable in wide field microscopy. Detector noise is in most case negligible.